Everyone has their own Christmas food traditions. Whether it's the national traditions or we make up our own ones, doesn't matter! What matters is that each year we make the same beloved foods and we try out some new ones. But what makes Christmas is the taste of Christmas and spending it with the people we love the most!
So, in Hungary there are very few houses now that don't have some of these rolls. They're that Christmas-y around here. The most popular fillings are the poppy seed and the walnut ones. To tell the truth, we rarely have these ones.
My personal favorite is the one with sweet ricotta cheese. Oh my, it is sooo good! Not many like it as much as I do, but it means more for me! Which is not the best idea but oh well, it's December and you know what I think of diet and December. They just simply don't go together :D There will be plenty of time to shred those love handles starting in January :P
But back to the point. We have rolls filled with cinnamon-apple, chocolate and some plum jam. They're pretty amazing! And usually my Grandma makes them but this year I finally forced myself to give it another try. Because I tried making it about 3 years ago but then I had no idea how the yeast works and the rolls turned out ugly and bad.
So this year, I was a lot more experienced and the recipe worked! I filled them with the traditional poppy seeds and walnuts and they are a hit!

ps: the original recipe makes 5 huge rolls, so I halved it and had 2 big ones. That's the one I will share with you. 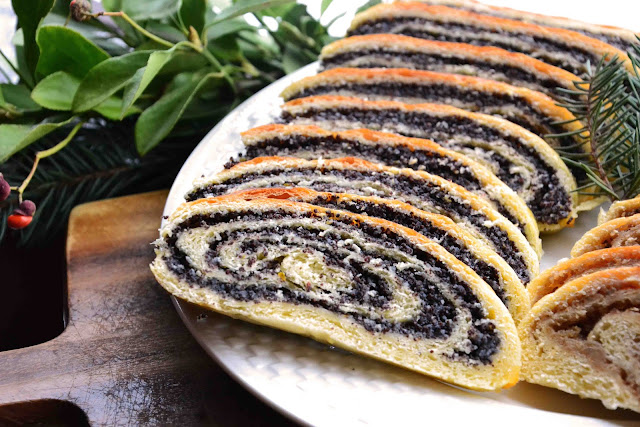 Warm 1.5 dl milk and dissolve 1 teaspoon of sugar in it. Add in the yeast and mix it with your fingers. Put it aside so it will get foamy.

Incorporate the flour, salt and powdered sugar. Cut the butter into the flour mix and work it together with your hands so you'll get crumbles. You can use an electric mixer, as well, but I like to use my hands. Add in the egg yolks, the sour cream and the foamy yeast. Knead, knead, knead until the dough won't stick to your fingers as much. It will take about 10-15 minutes to knead the dough. Place the dough in a floured bowl, spray some oil on top and let it rise for 90 minutes in a warm environment. I put mine in the oven on 40C.

While your dough is rising, prepare the fillings: recipe is down below.

When your dough is risen, divide it into 2 or 3 smaller parts. Roll out into a rather thin rectangular. This is when you spread the fillings on the rolled out dough. Roll it up, so you'll get a nice log-like filled dough. Do the same method with the remaining dough.

Whisk the one egg yolk with some water and coat the dough rolls. Poke the rolls all over and let them sit at room temperature for 30 minutes.

Coat them with the egg-water mixture again. Now place them outside or in the fridge, wherever it's cold for another 30 minutes. Preheat oven to 200C.

Put them in the oven and bake for 10 minutes, then lower the temp to 160C and bake for another 15 minutes. If it gets too brown, put a baking sheet on top while baking.
When ready, wait until they're cooled down and slice them  and enjoy :)

Bring the water to a boil and add the sugar and vanilla. Cook it until it's a syrup, about 10 minutes. Pour in the milk and bring to the boil again. Switch off the heat and add in the walnuts and lemon zest. Cool it down before spreading on the dough.

Incorporate the sugar, grits and lemon zest with the poppy seed. Bring the milk to the boil and then add in the poppy seed mix. Cool it down before spreading on the dough. 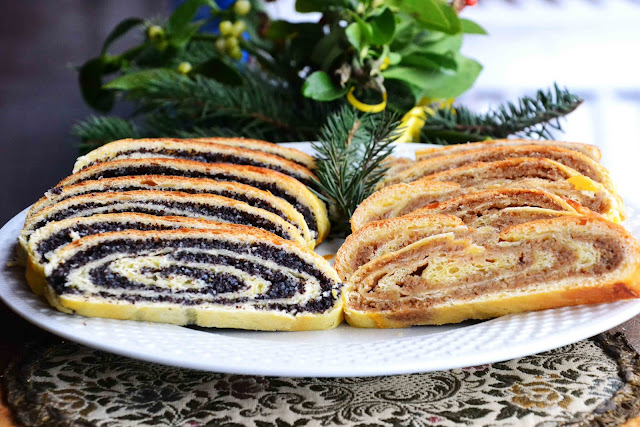