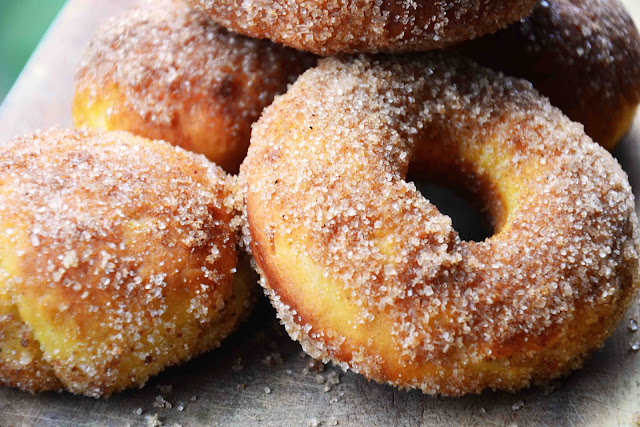 I am sick. I am weak and definitely aren't craving any sweets. But it's the weekend. And I was dying to make a bundt cake. I know...Bundt cake is not relative to doughnuts. Not even slightly. Let me explain. I WANTED to make a bundt cake but as it turned out, we do not own such a cake pan. Bummer, right?
But my mom was being her awesome self and found the doughnut pans which were missing for about 6 years. I got them 6 years ago, tried them once, didn't succeed so "someone" removed from eyesight ever since...
But now that we have them and no bundt cake pan so let's make doughnuts! I was searching for a recipe that didn't have a glaze on it, we are out of powdered sugar... And this recipe kept coming up. And oooh...it is good. Really good. Even though I am talking about doughnuts, these are not super unhealthy due to them baked not fried. My stomach was light afterwards unlike with its fried version. 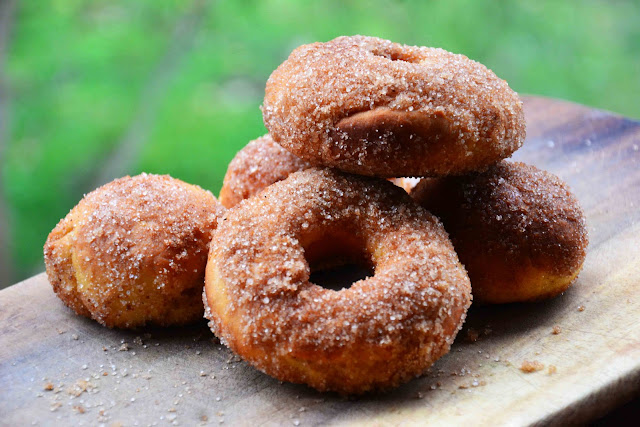 So if you're in super need of a doughnut, give this a try! Worth it! :)
Cinnamon Sugar coated Doughnuts
makes for about 15 doughnuts
1 egg
1/4 cup sugar
1 cup warm milk
1 tablespoon dry yeast - for me it was a 7gram package
1 teaspoon salt
2 teaspoons vanilla
2 1/2 to 3 1/2 cups flour - I needed more than 3 cups
1 stick butter
for the cinnamon sugar
1 stick butter
1 cup sugar
cinnamon
With a paddle attachment beat the egg with the sugar. Add in the milk, yeast, salt and vanilla. Add 2 cups of flour and then the butter and beat until smooth. Add in the rest of the flour. It should be soft and moist but not sticky.
Cover the bowl with a towel and let it rise for an hour.
Roll the dough out and with biscuit cutters cut holes out. I didn't have a biscuit cutter so i just formed the dough with my hands. Place the dough in the doughnut pan and let it rise for 20 minutes in a warm environment. I put it on the heater. When they rise to their double size bake them for 10-12 minutes on 200C.
Melt the butter. Combine sugar with the cinnamon. Dip the baked doughnut in the melted butter and coat it with the cinnamon sugar. Enjoy :) 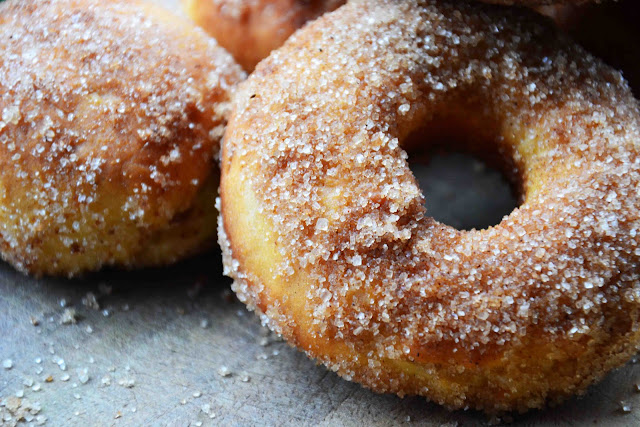